Around the new year in 2013, after having meticulously worked out our wedding plans, we thought that it was time to think about the Honeymoon. We always wanted to go to the Faroe Islands but to avoid all the visa rigmarole, we set our eyes somewhere else. So, one afternoon during the Christmas break, as we were walking down the high street, we noticed some offers on the Thomas Cook shop window and we entered the shop. When we came out, we had already booked our honeymoon. It was that easy. So, when I heard the news of Thomas Cook getting into liquidation, it was shocking, and partly sad, seeing another high street shop disappear. A year has gone by since the liquidation of Thomas Cook and more high street shops have bitten the dust since. But then, I thought that this is human evolution, and we cannot stop the juggernaut of time. We can, however, change our habits. But do we really care? If we don’t, when will we start caring? And who would be the next to close its shutters? 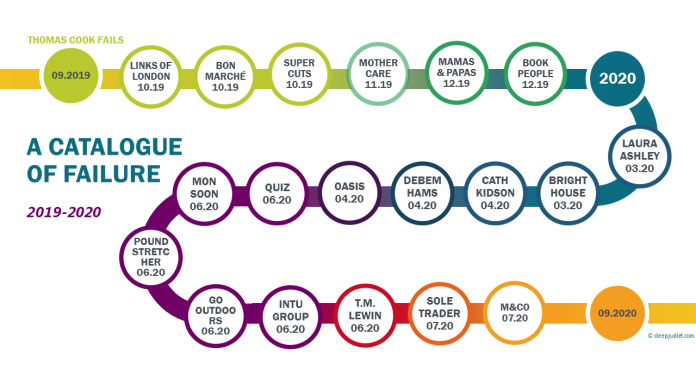 A catalogue of failures: roadmap of failed shops since liquidation of Thomas Cook

Was Thomas Cook a victim of a bad moment? Could it have been saved by the government if the Brexit threat didn’t loom large? Perhaps the £150m public bailout would have helped the ailing travel operator, but with the public funding already stripped down to bare bones, it would have been unjust to expect diverting money from essential services into a profit-making enterprise. Especially, when it surfaced that despite the company being in trouble, the top bosses received millions in payment over the past few years. It is more agitating thinking that the people in the management board will soon find a position in another company, earning a large salary, and taking no accountability of their collective failure of judgement.

We heard the rumours months ago that many Thomas Cook high street shops might be closing. The company was struggling then, and nothing had changed since, resulting in the liquidation during the weekend of 20th September last year. Was it only the management who was at fault? What about the highly inflated price, poor customer service, a not-so-special holiday experience? Perhaps the staff were complacent, perhaps there were other issues. Such a catastrophic failure might not be entirely attributable to its management. But ultimately, the onus was on the management to sense the pulse of the enterprise and take corrective actions. Instead of that, Thomas Cook management, like any other business, was more interested in profiteering and looking at the interest of the board members than the company itself. So they carried on ripping customers off as well as their employees and exploit the hotels and small businesses in the tourism industry. It didn’t matter as long as they received their annual bonus, while the business hit the tipping point.

Two remarkable things happened during the week of 23rd September 2019. First, of course, Thomas Cook going into liquidation. The second, the Greta Thunberg address at the UN headquarters. The two incidents may have a vague connection regarding the enormous carbon footprint left by the tourists, but there is a far more disturbing correlation than that. Greta’s movement is awe-inspiring, and she has definitely reached the critical mass to be heard worldwide. However, not much is really happening as the outcome of her protests. Of course, it will take time for the governments to change regulations but as individuals, nothing is stopping us to act now. But we are not. Why? Because it was too convenient for us to carry on living our lives rather than making drastic changes. So we may blame the management, the prices, the government, but knowingly or unknowingly, time after time we fall prey into the hands of capitalism. The rule of the market is simple. If there is a demand, there will be supply. And the customer is king because they help pay the bills.

Thomas Cook was a 178-year-old organisation. It offered holiday experiences across most of the world, catering to a diverse range of customers. Thomas Cook may have been a household name, it may have created many happy memories for its millions of travellers. But have they been such an ideal British institution that the government needed to consider saving? Although the advent of low-cost airlines contributed largely, it was the packaged holidays abroad that was one of the main factors behind the decline of the British seaside towns. Did society react then? It didn’t, and the dilapidated seaside towns are stark reminders of price wars in all segments of the industry, as well as our never-ending desire to gain some more. But at what price? Package holidays have already been in the decline for some time. With a new comparison site arriving almost every day, there is little margin left in the travel industry. First, there were the flight price checkers, then we had hotels, followed by a combined deal checkers. The hotels are then replaced by property sharing services like Airbnb. There are bloggers and influencers informing about loopholes to have cheap holidays. We are overloaded with information, which we use daily to benefit from it. The travel industry is no exception. For the travel companies to survive, there was only one option left. Exploit the supply network to further lower the price to maintaining margin. Probably here, the banks came in. They were just happy to lend cash needed to keep things functional, the cash the company never have seen. So, maybe not through a drastic step, but through many incremental changes, Thomas Cook had gone past the point of no return.

Could the government have stepped in? Of course, it could, it did save the banks during the recession of 2008. But the question is whether the government should have intervened and bailed them out? There is a nostalgia involved with Thomas Cook. It had become one of the British institutions, and Thomas Cook revolutionised the British travel industry. It is understandable the nostalgia surrounding Thomas Cook, but there is no justification to divert taxpayer money into saving a profit-making organisation. For once, I agree with the Tory government’s decision, but I must also say in the same breath that this dismal state is mainly attributable to the nepotistic Tory politics, regardless of whether they are in power. Society in Britain is grossly polarised, with the wealth gaps between the richest and the poorest part of the population widening at an exponential rate. Britain in true sense is a plutocracy and the wealthiest have and will always back the conservatives who in turn turns a blind eye to the malpractices of the companies as long as they back the party.

Thomas Cook is not the first company to go into liquidation, nor will be the last one. Our growing desire to afford things that we cannot, have waged a price war in the consumer market and only us, customers, are to blame for it. The worst sufferers are the high street shops who now have to compete with online entities with no or negligible running costs and overheads. Since I came to the UK in 2008, many high street shops have now disappeared, starting with Woolworths. And this trend will continue. I fear that even bigger names will join the long list in the near future. Soon people will know high street by the Greggs, Poundlands and pawn shops. With our shopping habits, we destroyed the independent shops on the high street and town centres, paving the way for the large enterprises. Now, their fortune is only beginning to fade away, and yet again, we are driving the business out of big retailers and into the cyberspace.

So who’s next? You can almost predict that many of the retailers will soon struggle to generate revenue and sustain their running expenses. Shops like Waterstones and WHSmith because an independent seller will sell a book at half or lesser price on amazon, without even delivery charges. Similarly, Primark, Asos and Boohoo.com will soon pose an existential challenge to M&S, Next, House of Fraser, Debenhams and alike. It’s not pleasant to play this game of roulette, predicting which organisation will succumb to the market realities, whilst thousands run their livelihood based on their association with the retail industry. Yet, it is our own doing, by trying to maximise the worth for our money, we have fostered a system that has now being outdone by the price wars. Retailers, like the humankind, will need to adapt or disappear.